Comptes Rendus Biologies -  Article on Coronavirus and the effects of smoking

A nicotinic hypothesis for Covid-19 with preventive and therapeutic implications, by Jean-Pierre Changeux, Zahir Amoura, Felix A. Rey, Makoto Miyara.

Mobilization of the Mersenne team during confinement

Our team remains fully mobilized during this confinment period, at work so that the journals keep publishing in the best conditions. We are reachable by email (priority) to answer any of your questions contact-mersenne@listes.mathdoc.fr.

The 2d issue of the 2020 d'Algebraic Combinatorics en ligne

Le second issue of the 2020 volume of Algebraic Combinatorics is online : https://alco.centre-mersenne.org/issues/ALCO_2020__3_2/.

Publication of the first issue (volume 358) of Comptes Rendus Mathematique 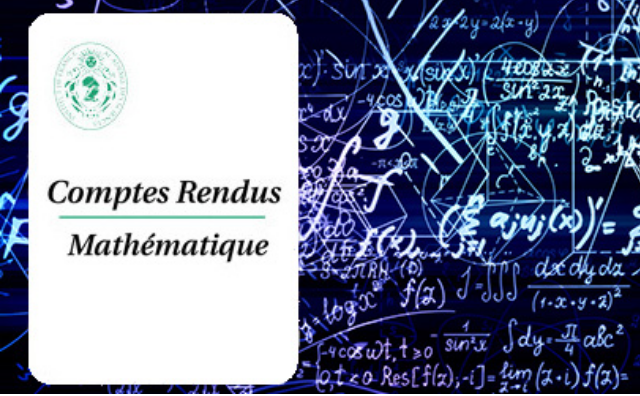 The first issue of volume 358 (2020) of the Comptes Rendus Mathématiques de l'Académie des Sciences has just been published, in full open access.

We are proud to host this journal and present the first issue of this prestigious serie published by Centre Mersenne.

Discover the table of contents

During this unprecedented period of confinement, all the journals of Centre Mersenne remain freely accessible to everyone and we ensure the continuity of the service to the editorial teams. Take care of yourself and others!

A new article for Open Geomechanics

The Mersenne team wishes you a 2020 year full of thrilling publications and open projects! 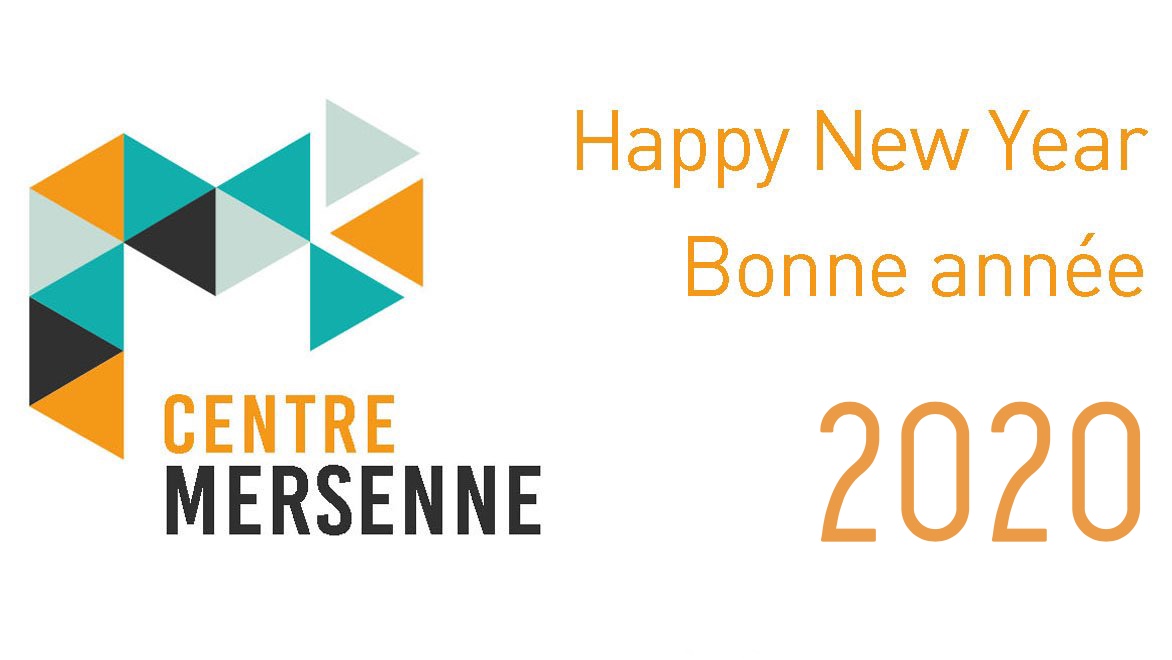 2020 : The Comptes Rendus are published by Mersenne

Since the 1st of January 2020, the Comptes Rendus of Académie des Sciences (except Palevol) are published by the Centre Mersenne.

All future issues will thus be accessible on the following websites:

For the first issues, be patient, they shall be online in February or March. But you can still access the Comptes Rendus' archives published by Elsevier on tge Académie des sciences' website.

As part of the development of its activities in favour of open science, Mathdoc hires a LaTeX (M/F) layout designer on a contract.

6th issue of the 2019 volume of Algebraic Combinatorics online

The sixth issue of the 2019 volume of Algebraic Combinatorics has just been published and is available online: alco.centre-mersenne.org/issues/ALCO_2019__2_6/.

The Comptes Rendus de l'Académie des Sciences for the Mathématique, Mécanique, Physique, Chimie, Géoscience and Biologies series join the centre Mersenne as of the 1st January 2020. Submissions are already open on their new website.

The Palevol series will be published by the Museum of Natural History.

The Centre Mersenne is pleased to welcome the prestigious series of this illustrious institution.

The Comptes Rendus were published between 2002 and 2019 by the publisher Elsevier France. The archives of this period are still available on the publisher's website.

The archives since 1935 are accessible on Gallica, from the site of the Académie des sciences.

The team will offer a Lightening Talk on Wednesday 20 November.

Mersenne will attend the 2d Journées nationales de la Science Ouverte (Open Access national Meetings) on the 18-19 November in Paris. Its programme is full of interesting communications. Some anouncement shall be made.

Review the the plenary sessions and speakers' presentations. 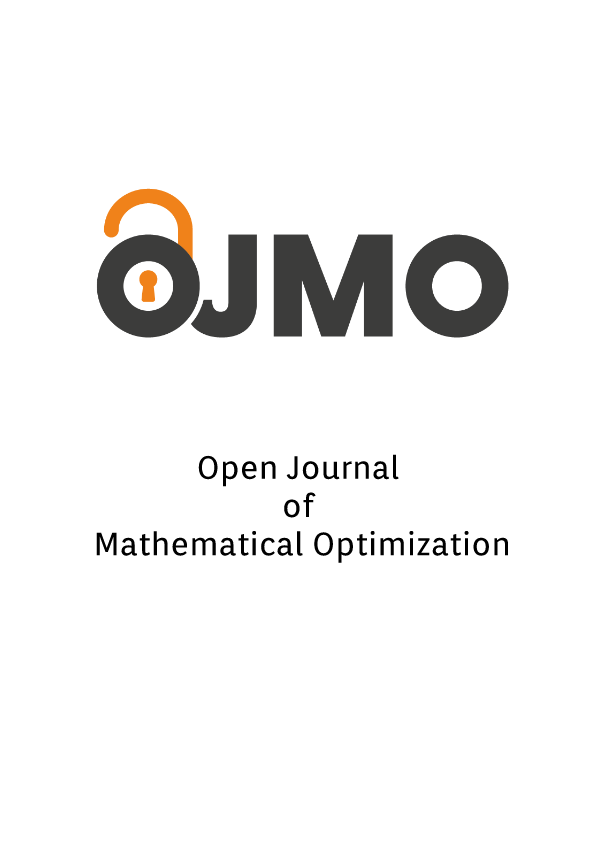 Launch of a new journal in Mersenne

A new journal has just been launched on Centre Mersenne: Open Journal of Mathematical Optimization.

This journal in Mathematical Optimization was developed by a resourceful team, who was eager to share freely and immediately scientific results with the world.

A new article for OGEO

Five new articles have been published by Annales Henri Lebesgue.

The fourth issue of the 2019 volume of Algebraic Combinatorics has just been published and is available online: https://alco.centre-mersenne.org/issues/ALCO_2019__2_4/.

The first article of the new journalOpen Geomechanics has just been published on Mersenne: https://opengeomechanics.centre-mersenne.org/articles/OGEO_2019__1__A2_0/.

Centre Mersenne will be present at Global Science Week organised in Grenoble from 3 to 6 June 2019 by Univ. Grenoble Alpes in World Trade Center.

This is the first edition of this international event that will gather representatives from the socio-economic world and scientists from all around the world to exchange and tackle 4 main challenges of the century.

To know more about the programme.

The Mersenne team will attend the 23rd edition of the International Conference on Electronic Publishing (ElPub) 2019 on 3 & 4 June 2019.

The conference gathers academic and publishing professionals to echange about the future and major issues of academic publishing.

The Mersenne team will present the first year of operation of the project.

The Conference will take place at Pharo in Marseille on 3 and 4 June 2019.

Have a look at the programme.

A collective cristal award for Numdam

A collective Cristal award was given the 23 May 2019 by the CNRS to the Numdam team, which also happens to be part of the Mersenne team,  for developing the French Digital Mathematics Library  ! 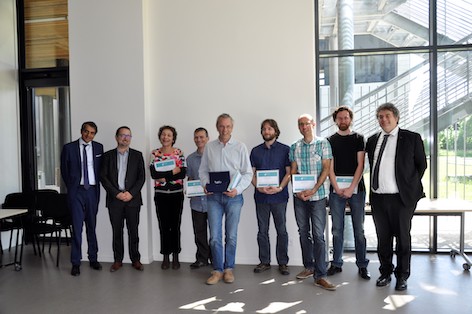 The second issue of the 2019 volume of Algebraic Combinatorics has just been published and is available online: https://alco.centre-mersenne.org/issues/ALCO_2019__2_2/.

- On the double-affine Bruhat order: the ε=1 conjecture and classification of covers in ADE type - Muthiah, Dinakar ; Orr, Daniel

- The skeleton of the UIPT, seen from infinity - Nicolas Curien ; Laurent Ménard

JEP in the centre Mersenne

The Journal de l'École polytechnique, web-published by the Cedram since 2014 has been migrated to the Centre Mersenne. The whole content is thus published through the Mersenne platform and accessible via the new JEP website, which respects all the best practices. 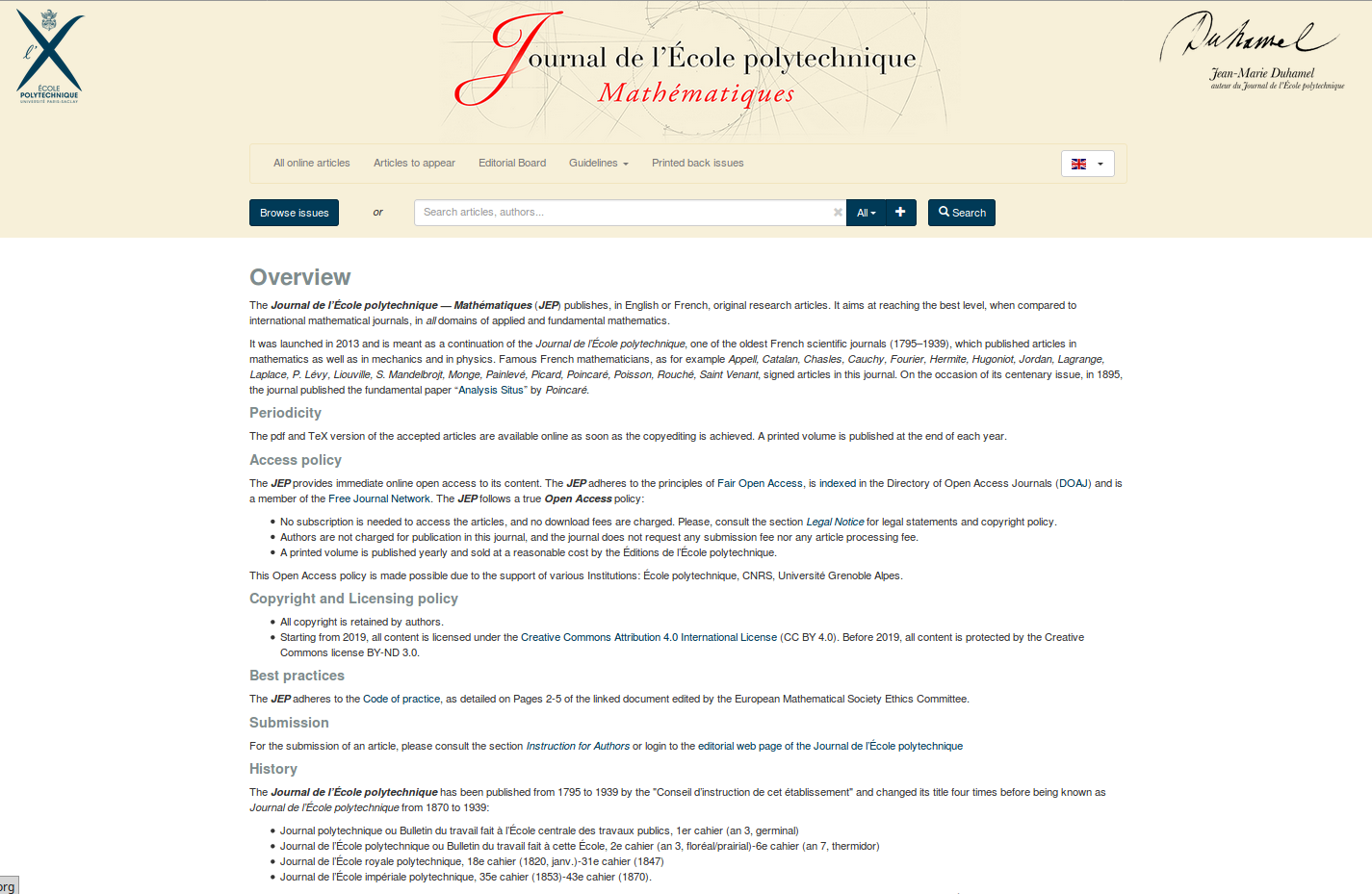 The centre Mersenne is taking part of the first edition of the Academic-Led Publishing Day, this very 7 February 2019.

This event, dedicated to academic-led publishing initiatives, is initiated by Scholastica and Free Journal Network, and aims at creating an open dialogue about programs and economic models between stakeholders.

A series of events (virtual and in-person) will be organised throughout the day, and resrouces will be made available on the website.

AIF are now web-published on the Mersenne Platform

The Annales de l'Institut Fourier, previously published by Cedram have now joined the Centre Mersenne. You can now access all their content via their new website, url https://aif.centre-mersenne.org/. What's new? A new logo, more info...

To manage their editorial process, the AIF also have a new OJS Instance instead of their old Ruche system. 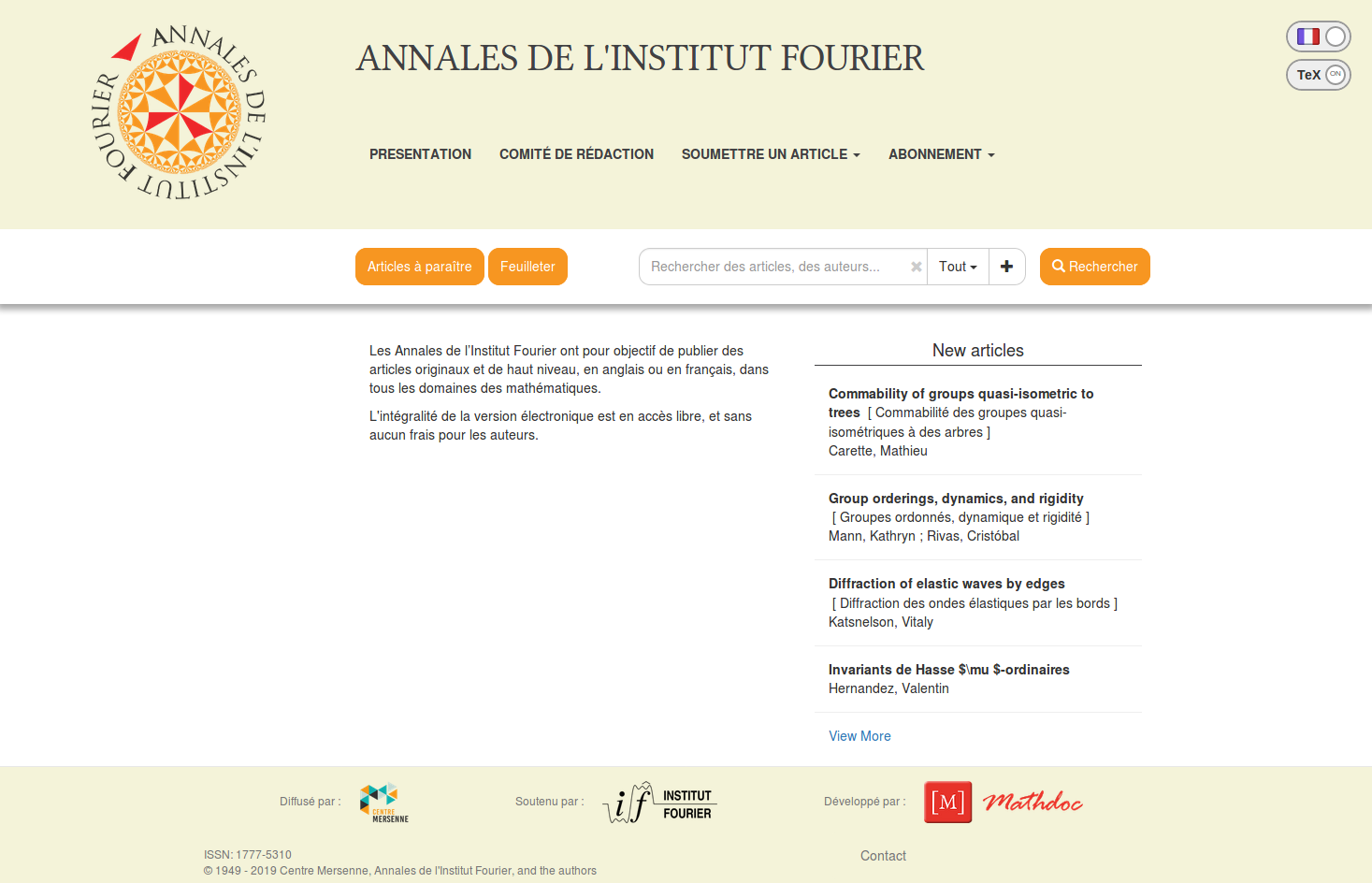 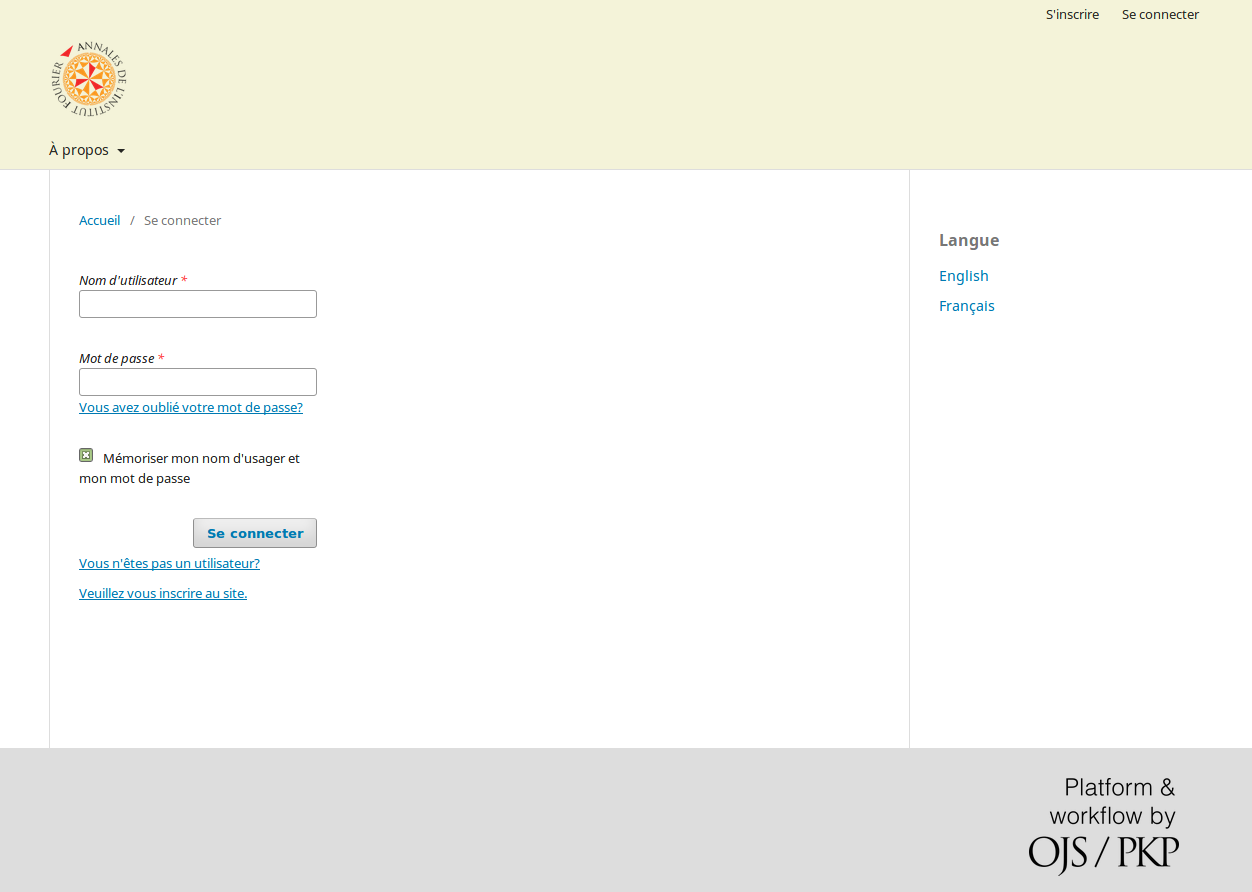 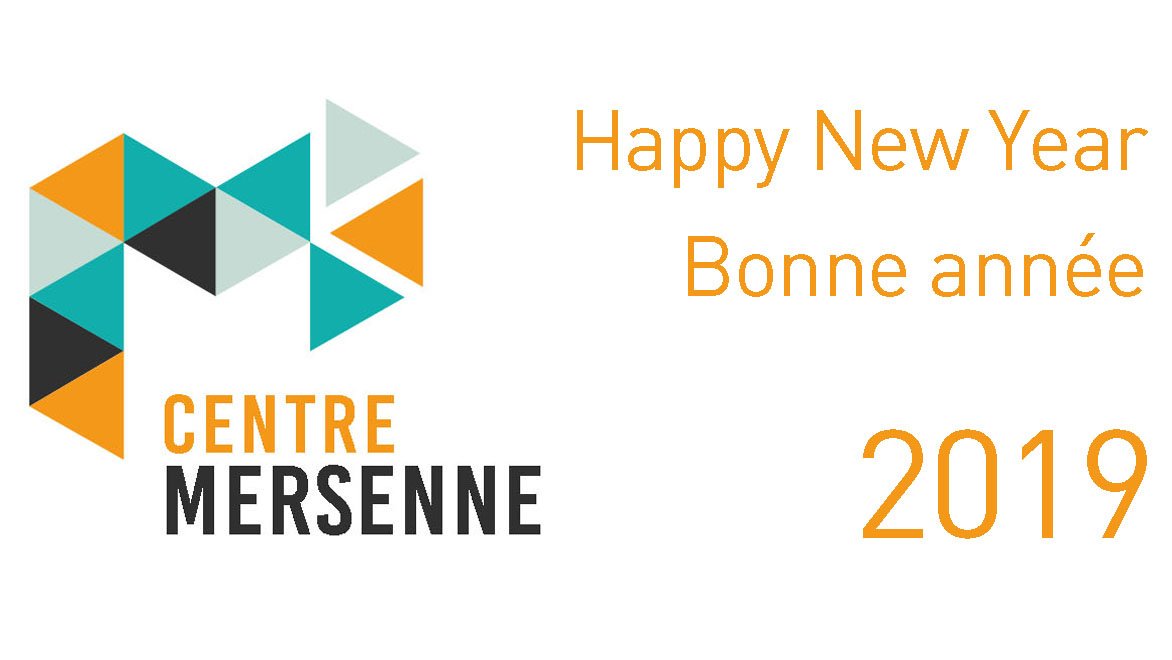 The fifth issue of Algebraic Combinatorics is online! Discover it on https://alco.centre-mersenne.org/issues/ALCO_2018__1_4.

We will be presenting a poster.

Link to videos (French and English)

The centre Mersenne will be present at the Research Day of SIF-SMAI, at the Institut Henri Poincaré, octobre 2d, 2018, around the future of scientific publications and peer-reviewing.

The fourth issue of Algebraic Combinatorics is online! Discover it on https://alco.centre-mersenne.org/issues/ALCO_2018__1_4.

On the Notices of AMS of August 2018, Mark C. Wilson, one of Algebraic Combinatorics's editors, explains his point of view about fair open access's ecosystem by Mark C. Wilson.

Both articles mention the Centre Mersenne.

RDV in next PKP sprint

The centre Mersenne will take part in the next PKP sprint, in Heidelberg, Germany.

The 2018 edition of the International Congress of Mathematicians will take place in Rio de Janeiro, Brazil, from June 1 to 9, 2018, at the Riocentro Convention Center, du 1er au 9 août 2018.

The Centre Mersenne will be represented by Thierry Bouche.

The third issue of Algebraic Combinatorics has just been published and is available online: https://alco.centre-mersenne.org/issues/ALCO_2018__1_3

The Mersenne team will be at the 2018 ElPub Conference in Toronto, to present the project for open scientific publishing. RDV June 22-24, 2018. Read the programme !

The 22d Conference's theme will be "Connecting the Knowledge Commons: From Projects to Sustainable Infrastructure", a subject that perfectly fits our project aiming at being scalable and sustainable.

On April 19th, University of Lorraine announced that it would not renew its subscription to the Springer Big Deal. It will instead support open access publishing projects such as SciPost, OpenEdition...

Besides, Rennes University also canceled its subscription to Springer and will finance three open access projects, among which the newly-created Annales Henri Lebesgue, a mathematics journal, published by the Centre Mersenne.

The second issue of Algebraic Combinatorics is online !

Table of contents : Permutrees by Vincent Pilaud and Viviane Pons ; A Demazure crystal construction for Schubert polynomials by Sami Assaf and Anne Schilling ; Symmetry in Turán sums of squares polynomials from flag algebras by Annie Raymond, Mohit Singh and Rekha R. Thomas ; A property of the Birkhoff polytope by Barbara Baumeister and Frieder Ladisch ; Minimal free resolutions of lattice ideals of digraphs by Liam O’Carroll and Francesc Planas-Vilanova.

First meeting of the Scientific Committee

Launch of the Centre Mersenne

January 2018: Centre Mersenne is officially launched with the publication of the first volume of Algebraic Combinatorics.